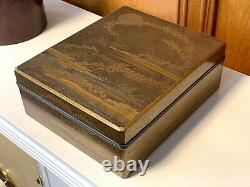 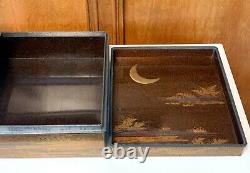 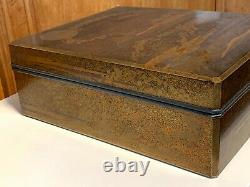 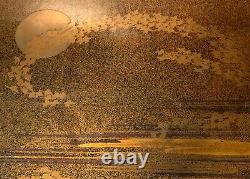 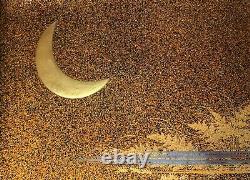 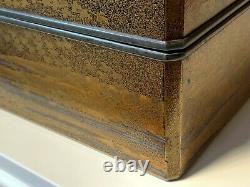 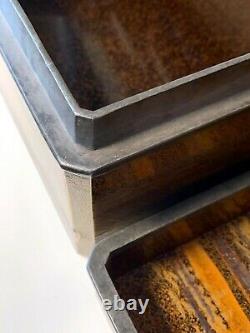 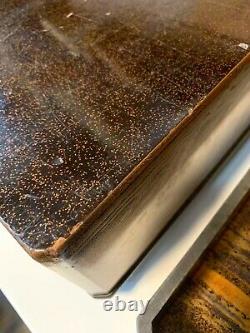 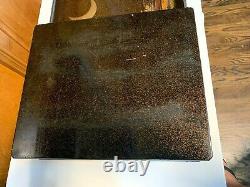 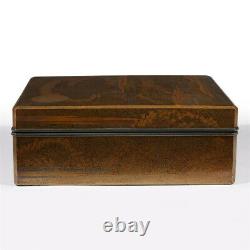 A large lacquer Ryoshibako (Paper Box in Japanese) finely decorated with Maki-e circa 17th century early Edo period. The box is of an impressive size and was used to store paper documents. Both sides of the lid were elaborately decorated with maki-e and the edge was befitted with lead rim, an early practice before the silver rim became common later.

The interior and base were finished in Nashiji. The night scene on top surface of the lid depicts flocks of chidoris flying in formation from a sea shore swaying with reeds under a full moon, using hiramaki-e in both gold and silver. Ribbons of clouds were achieved with different densities of gold powder. The underside, in contrast, shows a crescent moon in takamaki-e above the sea with ferns and reeds.

Chidoris, the plovers, are symbolic in Japanese culture as "thousands of blessings" and longevity. The Namichidori, the pattern in which the chidori flies in the nami (wave) represents the eternal love and safety of couples and families. For detailed references on the historical background and the use of chidoris on lacquerware, see the reference below.

This very lacquer box was featured for sale as lot 339 in Christie's London Sale Japanese Art and Design Nov 10, 2004. Copies of catalog pages available upon request. The lacquer box comes with a wood storage box which is quite worn, as shown.

The item "Large Fine Antique Japanese Lacquer Box Early Edo Period" is in sale since Monday, October 26, 2020. This item is in the category "Antiques\Asian Antiques\Japan\Boxes".

The seller is "gallery-t" and is located in Miami, Florida. This item can be shipped worldwide.