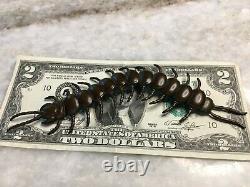 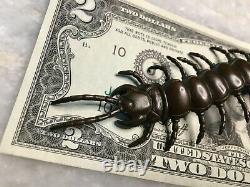 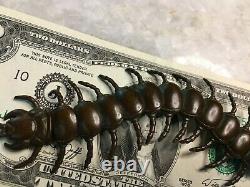 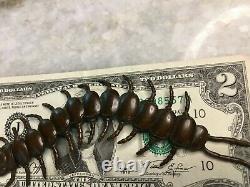 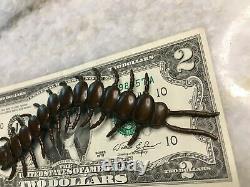 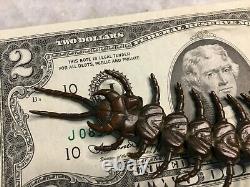 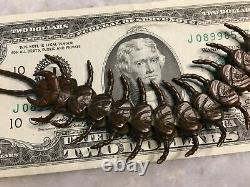 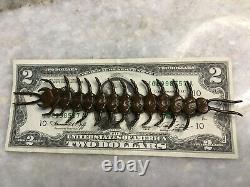 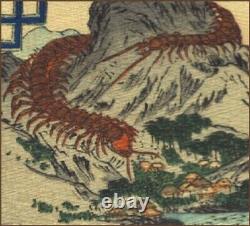 Approximately 16cm long; see size relative to the 2-dollar bill that its on. Very fine details and craftsmanship; each body segment articulates.

No losses to legs or antenna. A rare, high quality item. The mukade is a giant man-eating centipede. That lives in the mountains. The mukade has a weakness to human saliva. Or mukade was killed near Lake Biwa. (aka Tawara Tda Hidesato, "Rice bag Tda") according to the legendary tale Tawara Tda Monogatari. While crossing the bridge over the lake.

Tawara was besought by a giant serpent to avenge the killer of her sons and grandsons. This centipede made its lair at Mount Mikami.

Tawara shot two ineffective arrows, but the third arrow smeared with his saliva proved lethal. From Wikipedia, the free encyclopedia. Scolopendra subspinipes is a species of very large centipede. One of the most widespread and common species in the genus Scolopendra. It is also found on virtually all land areas around and within the Indian Ocean. All of tropical and subtropical Asia from Russia. To the islands of Malaysia. South and Central America, the Caribbean. Islands, and possibly parts of the southern United States, but how much of this range is natural and how much due to human introduction is unclear. With a wide geographic range and numerous color variations, the species is known by a great many common names, including Chinese red-headed centipede , jungle centipede , orange-legged centipede , red-headed centipede , Hawaiian centipede , and Vietnamese centipede. It is among the largest centipedes. With a maximum length of 20 cm (7.9 in). This centipede is an active, aggressive predator that preys on any animal it can overpower. This is a large species which can grow up to 20 cm in length.

It has colour variations: its body is usually red. With yellow or yellow-orange legs.

In common with other members of genus Scolopendra. It has 22 body segments. With each segment having one pair of legs. A pair of modified legs known as forcipules can be found on its head, which is covered by a flat shield and bears a pair of antennae. The forcipules are the major tools used by the centipede to kill its prey or for defense, as they have sharp claws that connect to venom glands.

(the openings located along the sides of their bodies). These openings are either round- or S-shaped. They have simple eyes with poor vision, so they rely much on touch and their chemoreceptors. The species can be found in tropical and subtropical regions throughout the Old World. This is an aggressive and nervous arthropod, which is ready to strike if interfered with and is sensitive to vibrations nearby. It preys primarily on arachnids. It is large enough to overpower small vertebrates. And will readily attempt to consume them, as well. It tends to try to eat almost every living animal it encounters that is not longer than itself.

It seizes prey with its anterior legs, then curves its head quickly behind to implant its venomous jaws deeply and firmly into the prey. The prey is held by the centipede's other legs until it dies from the fast-acting venom.

During a fight, the centipede uses its entire body, coiling the prey or enemy with its legs firmly attaching to the body of the opponent. Then, it quickly penetrates its forcipules into the victim for venom injection. The male produces capsules containing mature sperm cells, spermatophores. Which are deposited in a reservoir called the spermatheca. Of the female during mating. The female then fertilizes her immature eggs, oocytes. And deposits them in a dark, protected area. The female lays 50 to 80 eggs, which she vigilantly protects until they hatch and the baby centipedes molt once.

If danger is detected, she wraps around her young to keep them safe. The young centipedes molt once each year, and take 3-4 years to attain full adult size. Adults molt once every year.

They may live for 10 years or more. Subspinipes has been reported as the apparent cause of a human death. A fatal case was reported in the Philippines. In which the centipede bit a 7-year-old girl on her head. She died 29 hours later.

The item "FINE Quality Antique Japanese/Japan Articulated Bronze Centipede Jizai Okimono" is in sale since Tuesday, August 3, 2021. This item is in the category "Antiques\Asian Antiques\Japan\Netsuke". The seller is "cosmic_goods" and is located in Freeport, Maine. This item can be shipped worldwide.