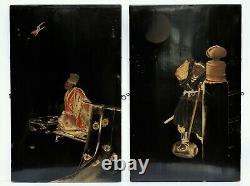 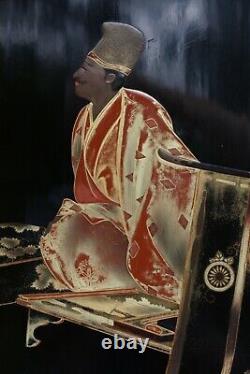 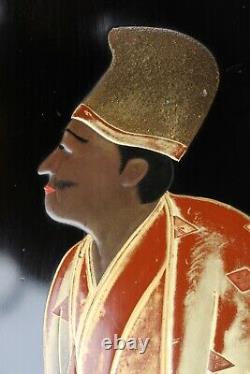 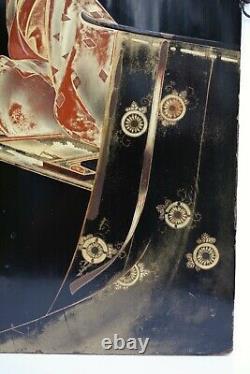 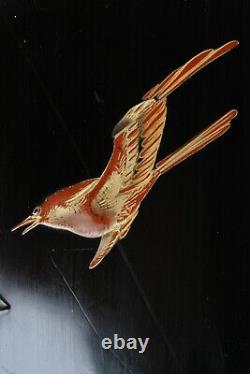 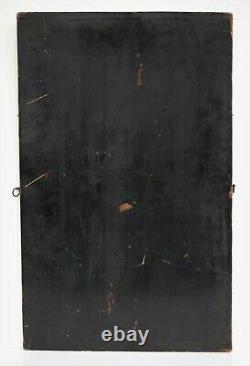 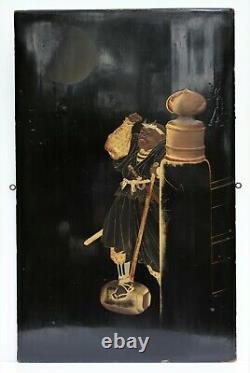 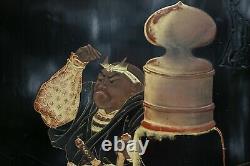 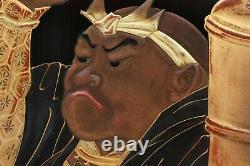 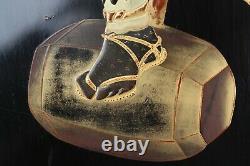 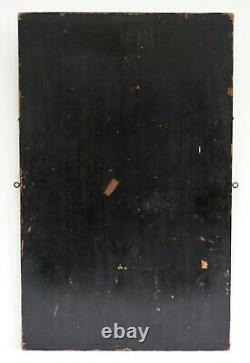 This is a finely decorated pair of black lacquer panels dating from the Early 20th Century in good antique condition. The detail in the decoration is simply stunning. The palette is limited to gold, black and red. The first panel shows a young man in a luxurious kimono kneeling at his desk with a beautiful lacquer box to his right and a richly patterned kimono draped over a rack to his left. A small bird flies overhead.

The second panel shows an older robed man appearing from behind a large gilded post on a moonlit night, standing with right hand raised and left hand holding the handle of a large wooden mallet. A sword is tucked into the man's belt and one sandaled foot rests on the head of the mallet. The older man on the second panel is believed to represent Benkei, a warrior monk, while the young man on the first panel is thought to be Minamoto no Yoshitsune, one of the most famous samurai warriors in the history of Japan, both of whom lived in the second half of the 12th Century. The scenes depict the night prior to, or following, their famous battle on the Gojo Bridge in which Benkei is defeated by his physically smaller adversary. The story continues with a second defeat of Benkei by Yoshitsune, this time at the Buddhist temple of Kiyomizu, following which the larger man throws in his lot with the young samurai and helps him in his fight against his sworn enemy, the Taira clan.

The reverse sides of the panels are plain black, each with the remains of an old label. Eye screws are located halfway down the sides.

Dimensions: Each panel is 66.5 cm height x 41.5 cm width. Condition: The panels are generally in good antique condition. There is some chipping of the lacquer on the panel edges and there are some small indentations and marks on the face of the panels but there are no losses.