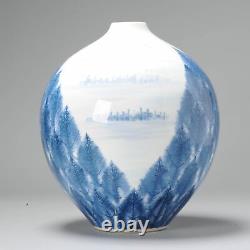 Fujii's specialty is the technique of drawing a mountain by. Veins of a leaf, called the "leaf technique", as if it were a complex tree branch. When young leaves such as magnolia are pressed against unglazed pottery like Japanese paper dyeing and bleeding Kuresu, the veins of the leaves emerge as dark lines, and the mountains are drawn by arranging them. This technique is used to capture the characteristics of the season, and the Arita landscape itself, which I imagined in my mind, is depicted in the work.

Akiaki Fujii has won many prizes including the Japan Ceramic Art Exhibition and the Kyushu Yamaguchi Ceramics Exhibition Minister of Education Award. A pot with dyeing the towering mountains was painted in front of me. If you look closely with your face close, you can see that even the branches of the tree are growing densely. The distant mountains are pale and small. On the other hand, the nearby mountains are drawn thick and large, and I realize that each tree is in the shape of a leaf. Aki Fujii is synonymous with this "tree leaf technique, " which draws a mountain with veins resembling complex tree branches. When young leaves such as magnolia are pressed against unglazed pottery like Japanese paper dyeing to let gosu bleed, the veins emerge as dark lines, and mountains are formed by lining them up.

Fujii explains, The mountain is the best way to make the best use of the shape of the leaves. What I draw is the Arita landscape itself that I imagined in my mind. The origin of this style was the leaf of a single tree, which was found only during the walk.

Fujii, who is also familiar with the bones, said, In the Meiji era, roasted plates made of wax were made, but these are so-called handmade products. It is said that it takes one to two days to draw a mountain on one vessel. The Fujii family is a family lineage that has been involved in pottery for generations, such as being allowed to use the family name sword as a pottery kiln during the Edo period. Fujii's pottery career begins with a 15-year-old painting apprentice.

He became independent as a painting craftsman the year after he won the first prize, and opened the kiln 10 years later. During this time, he has been working on various techniques, including the "cotton thread technique, " which involves spraying soil that has been melted with water onto unglazed wrapping yarn to remove the thread and create a three-dimensional effect. At the time of the boom in Komari, there were times when products that could sell were made more and more, which strengthened the idea that "business and art are different things". I still have the anxiety that good-looking products sell well, and really good works don't sell well.

After receiving the Prefecture Art and Cultural Achievement Award six years ago, Mr. Fujii has refrained from exhibiting activities such as exhibitions and solo exhibitions at pottery exhibitions for health reasons.

On behalf of them, the eldest son, Tsuyoshi (31), is developing an active creative activity using blue-white porcelain. He looks to his successor, who pursues his way with a style different from his father's. Fujii himself said, I think I can make another expression with Konoha technique. I want to open a hole in Arita who is somehow stuck, and he is eager to go outside again.

We can not control this. For China (& rest of Asia) & US allow at least 2 to 3 weeks. Depending on the situation it can take up to 1.5 month. This also influences the tracking data shown online. You can follow it at.

This item is in the category "Antiques\Asian Antiques\China\Plates". The seller is "theceramics_and_collectibles" and is located in this country: NL. This item can be shipped worldwide.