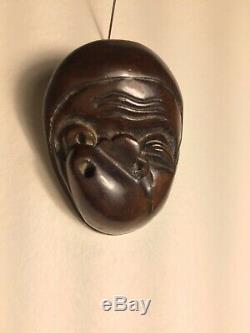 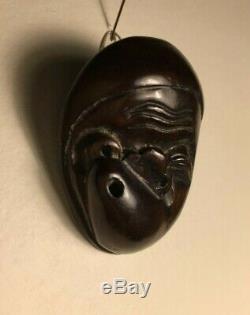 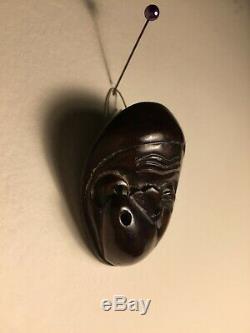 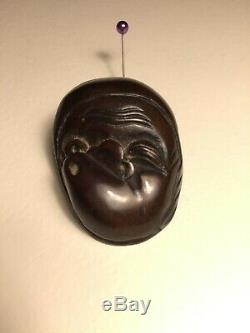 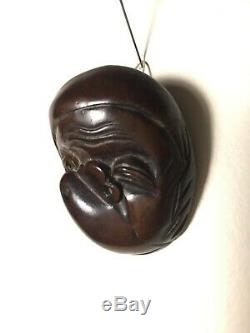 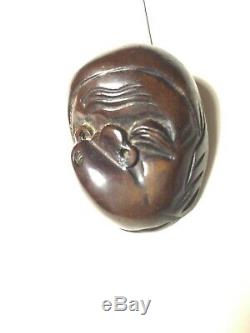 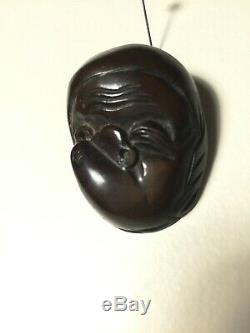 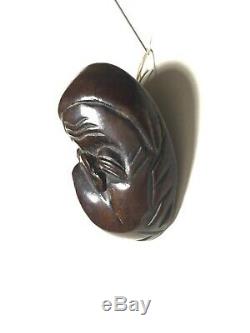 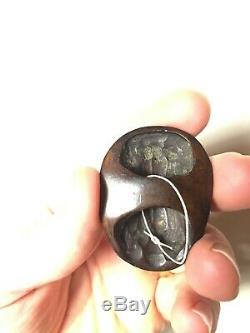 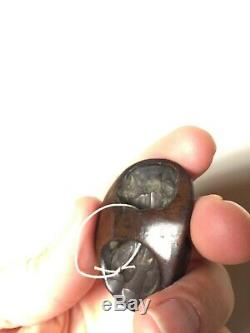 A lovely 19th Century Wooden Netsuke from Japan. Hyottoko is a comical Japanese character, portrayed through the use of a mask. His mouth is puckered and skewed to one side. Some masks have different eye sizes between the left and right eyes.

He is often wearing a scarf around his head (usually white with blue dots). There is a similar character for women called Okame or Otafuku. The origin of the name comes from "fire" (hi) and "man" (otoko), because the character is blowing fire with a bamboo pipe, hence the shape of the mouth. Hyottoko seems to have been a legendary character in Japan in the past, and is now a stock character. In Iwate Prefecture, there is a myth about the origin of Hyottoko. In the story, there was a boy with a bizarre face who could create gold out of his belly button, so when someone died in a house, you would put the mask of this boy at the top of the fireplace to bring good fortune to the house.

The name of the boy was Hyoutokusu. This is considered one of the possible names that lend plausibility to the origin of Hyottoko. In some parts of north eastern Japan, Hyottoko is regarded as the god of fire. There is a well known folk story in the form of music, izumoyasugibushi where a fisherman dances with a bamboo basket, having the same visual expression as the mask of Hyottoko.

During this dance, a person puts five yen coins on their nose. This is similar to myth of Iwate prefecture.

Izumo is the old name of Iwate prefecture and Izumo was famous for its iron industry. The dance was part of a dedication for fire and steel. Hyottoko also appears in traditional dance dengaku. He plays the role of a clown. Dancers wearing Hyottoko masks also appear in some Japanese local festivals.

One of the most famous Hyottoko dances takes place in Miyazaki Prefecture - Hyuga Hyottoko Natsumatsuri. The Hyotokko dance is believed to originate in the Edo period. The item "Fine Antique Japanese Netsuke Mask Mennetsuke of Hyottoko" is in sale since Thursday, February 14, 2019. This item is in the category "Antiques\Asian Antiques\Japan\Netsuke". The seller is "maskmonger" and is located in Freeport, Maine.