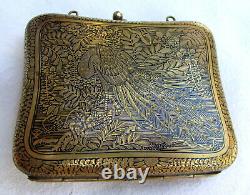 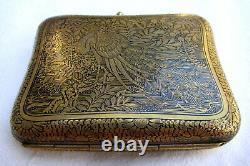 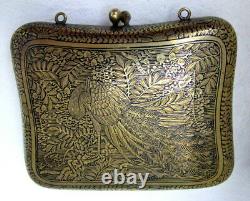 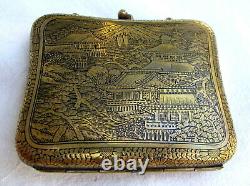 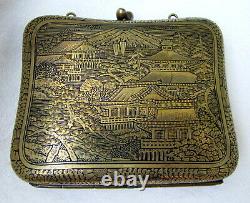 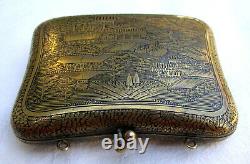 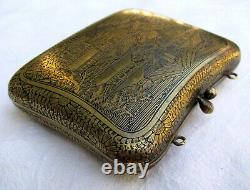 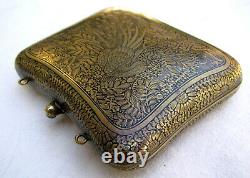 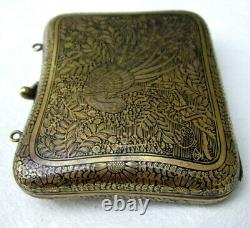 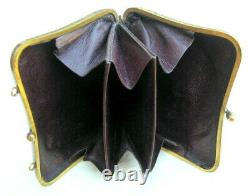 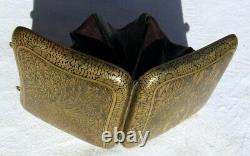 This piece is 3 1/8" wide x 2 5/8" tall x 3/4 thick, with graceful inward curves to the top and sides, with all 4 sides having fine and detailed gold damascene leaf and flower patterns on a black enamel background. There are 2 different extremely fine and detailed panels. The front panel is a Peacock surrounded by foliage in gold damascene on a black enamel background with hand line engraving in the feathers of the peacock as well as the leaves of the background.

The obverse side is gold damascene with a black enamel background with a landscape with traditional Japanese buildings with Mt. There are hand line engraved embellishments to the roof, leaves and mountain. The top closes with 2 teardrop closures that snap when closing and leaves a thin 1/32 gap between the two halves that could be easily tweaked to close tighter, but I have left it in as found condition. There are 2 ringlets to attach a chain that appears to be removed for use as a coin, token, key, or purse organizer.

The inside is lined in nice dark burgundy leather with 3 accordion compartments. The leather is in fine condition with one small scuff to an edge.

This would make a fine and unusual gift. Instead of halting their manufacturing way-of-life, the Higo-Zogan refocused their energy and skills to produce fine personal ornamentation. This style of damascene was first created by an Artisan named Yoshitoyo Fujii. Born 1868 into a metal-crafters family, developed a new Damascene technique called'Nunome Zogan'.

His etching method for which he received a patent, using acid to achieve the fine lines needed; but his work is not pure to the ancient Zogan technique using a chisel. Some Fujii items were selected to represent Japan in the numerous overseas exhibitions that were popular in the earlier 20th century, where he won numerous medals.

His works were presented to the Japanese Royal Family, and he was regarded as the best craftsman of the Damascene'Nunome Zogan' technique. Other craftsmen soon used this technique. Exceptions include holidays, power outages, and evacuations. Claims such as doesn't match description or photos, doesn't seem authentic, Doesn't fit, Wrong item sent, Missing parts or pieces, Doesn't work or defective, Arrived damaged. Due to a myriad of International and U.

Listing and template services provided by inkFrog. This item is in the category "Antiques\Other Antiques". The seller is "1knifeguy1" and is located in this country: US. This item can be shipped worldwide.