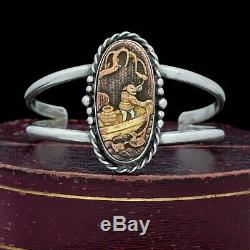 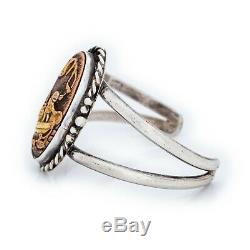 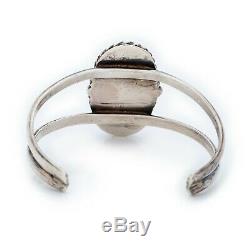 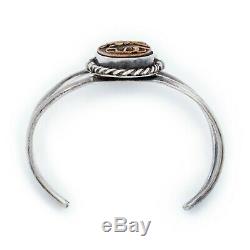 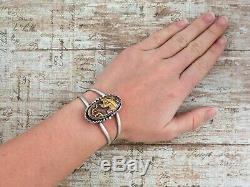 We have similar Japanese and Art Deco items, which would pair nicely with this piece, for sale this week. Listing Description by: Cait P. Age Circa: Art Deco C. Markings: Unmarked, tested, and guaranteed.

Closure/Clasp Type: The bracelet is meant to be worn over the wrist through the cuff gap. Link Type: Rounded and polished sterling silver. Notable Features: This bracelet was handmade during the Art Deco era. 925 sterling silver, the bracelet features a shakudo scenic accent. Shakudo is a billon of gold and copper that appears in Japanese jewelry and was first introduced to the west in the mid-19th century.

The use of shakudo dates back to at least the 12th century in Japan and was typically used to accent pieces made of less valuable metals, such as sterling silver in this bracelet. Japanese jewelry was highly desirable throughout Europe and North America during this time period, but the cost of having pieces custom-made and imported made it only available to the most wealthy aristocrats and socialites. The shakudo accent piece in this bracelet depicts a man fishing on a boat sheltered by a tree. The unique deep copper hue of the metal contrasts nicely against a gold wash atop certain high relief portions of the scene. To keep the shakudo accent piece secure, it rests in a sterling silver bezel setting, the rich red of the copper a lovely contrast to the cool sterling silver.

Surrounding the scenic accent is a rope twist border accented with small sterling silver beads. Two thin bands of sterling silver on either side of the accent piece taper together at the ends to form the larger band of the bracelet. A stunning example of shakudo jewelry made in Japan, this bracelet would make a valuable addition to any antique jewelry collection. Don't miss your chance to preserve this piece of cultural history. There is some wear to the gold wash, revealing the shakudo beneath it; however, this does not affect wear or the overall appearance.

The price has been reduced to reflect this. This listing is for the item only. The Art Deco era is famous for being the "Gatsby" or "Roaring Twenties" era.

A lot of gorgeous and timeless designs in jewelry came out of this period. Jewelry from this period was most often crafted between 1920 and 1940. Art Deco jewelry sometimes featured white gold or platinum, geometric designs, European cut diamonds, filigree, and calibre cut stones that are specially cut to fit the design of the piece. During the Art Deco period jewelers often made jewelry upon custom order, this would usually take weeks to months to completely craft by hand.

The Meiji era is a period of Japanese history which began in 1868 and lasted until 1912. During this era, radical changes began to occur throughout Japanese society, which saw a shift away from isolationism and feudalism to a society influenced by European and North American political systems. As well as adopting Western styles of government, Meiji Japan was also influenced by Western culture, including architecture, fashion, and jewelry. Jewelry from the Meiji era is unique from earlier Japanese pieces, as well as jewelry from the West, representing Japans attempts to redefine itself as a world power while still retaining its traditional culture and practices. Intricate work with bronze and cloisonné enamel was prevalent during this time, as were pieces featuring cultured freshwater pearls, coral, and diamonds. Brooches were especially popular amongst Japanese women during the Meiji era since they did not alter the body, as were traditional nesuke (small carvings worn on the belt of a kimono) and okimono (decorative objects). Just as Western jewelry influenced Japanese jewelers, the pieces produced during the Meiji era became very popular amongst Western jewelers and collectors and, to this day, remain highly sought amongst modern collectors. The item "Antique Vintage Deco Sterling Silver Japanese Shakudo Mixed Metals Cuff Bracelet" is in sale since Sunday, May 31, 2020. This item is in the category "Jewelry & Watches\Vintage & Antique Jewelry\Fine\Art Nouveau/Art Deco 1895-1935\Bracelets". The seller is "abeautifultimeco" and is located in Fort Collins, Colorado. This item can be shipped worldwide.