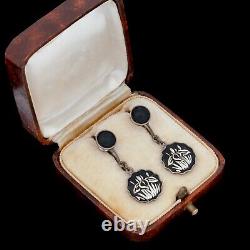 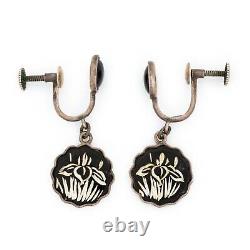 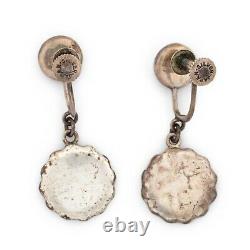 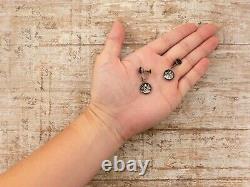 We have similar Onyx and Art Deco items, which would pair nicely with this piece, for sale this week. Listing Description by: Cait P. Age Circa : Art Deco C. Markings : "Sterling Amita Japan" on the backs of the earrings, tested, and guaranteed.

Gram Weight : 4.6 grams. Stone Treatment: The stone(s) appear to be untreated, but we are not certified gemologists. Stone(s) have been tested and guaranteed using a professional Presidium Duo refractive, heat, and hardness tester.

For Pierced or Non-Pierced Ears : Both. Handmade during the Art Deco era in Japan by Amita Co. Ltd, which was known for it damascene jewelry.

Each earring features a black onyx stone from which dangles a damascene accent. The damascene accents feature oxidized silver which gives it a black appearance with a chiseled design depicting blades of grass and flowers which were then topped with a silver foil to make the motifs pop. The earring are completed with screw-on backings, making them suitable for both pierced and non-pierced ears. This listing is for the item only.

The Art Deco era is famous for being the "Gatsby" or "Roaring Twenties" era. A lot of gorgeous and timeless designs in jewelry came out of this period. Jewelry from this period was most often crafted between 1920 and 1940. Art Deco jewelry sometimes featured white gold or platinum, geometric designs, European cut diamonds, filigree, and calibre cut stones that are specifically cut to fit the design of the piece. During the Art Deco period jewelers often made jewelry upon custom order, this would often take weeks to months to completely craft by hand.

Onyx is a chalcedony quartz gemstone that is found all over the world. It usually has a fine texture and black color; however, some onyx also displays colored bands or ribbons against a black or brown background.

Red onyx is quite rare and desirable and is also known as sardonyx. Onyx that has a deep green shade is known as Brazilian green onyx and is very rare.

In Greco-Roman myth, the goddess of beauty, Aphrodite, lay sleeping when Eros cut her fingernails and left the clippings scattered on the ground. Because no part of a heavenly body can die, the gods turned them into stone which later became known as onyx. Damascening is art hand etching an intricate design into a heavily oxidized (blackened) metal and then pressing gold and/or silver into the etched design. The term comes from Damascus, Syria, where artisans are credited with perfecting the process over 2,000 years ago.

This technique has a long history in Japan, when it was introduced through the silk trade in the 8th century. Damascene was frequently used to decorate the hilts of weapons. It also became popular in Spain at the same time, when the Moors conquered the country. Vintage Spanish damascene pieces typically show Arabic influenced designs and vintage Japanese pieces usually showcase oriental inspired motifs.

By the 1930s, more than half of the damascene items made in Japan were being exported to other countries, mainly England and the United States. The popularity of this style of jewelry lead to a boom in production of damascene items, particularly in Russia, Spain, and many Asian countries. The item "Antique Vintage Deco Sterling Silver Japanese AMITA Onyx Damascene Earrings 4.6g" is in sale since Saturday, September 5, 2020. This item is in the category "Jewelry & Watches\Vintage & Antique Jewelry\Fine\Art Nouveau/Art Deco 1895-1935\Earrings". The seller is "abeautifultimeco" and is located in Fort Collins, Colorado.