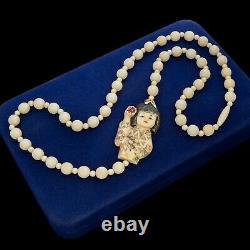 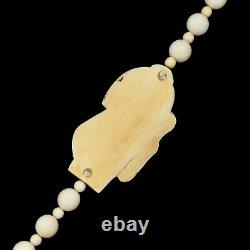 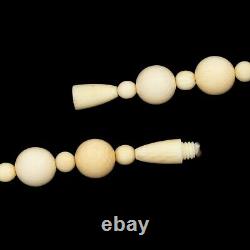 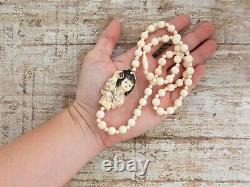 We have similar Japanese and Art Deco items, which would pair nicely with this piece, for sale this week. Listing Description by: Angela A. Age Circa : Art Deco C. Gram Weight : 32.1 grams. Main Stone : Carved resin beads and netsuke. Netsuke Length: 1.92 mm. Netsuke Width: 27.25 mm. Bead Diameter : 3.68 mm to 7.84 mm. The stone(s) appear to be untreated, but we are not certified gemologists. Stone(s) have been tested and guaranteed using a professional Presidium Duo refractive, heat, and hardness tester. Stone Cuts : Carved and polished resin beads and netsuke bead. Link Type: Resin beads and netsuke on white string. Handmade during the Art Deco era in Japan. The style of the piece suggests it was a piece procured as a souvenir on the Grand Tour.

Composed of a resin beads and a carved resin netsuke figure. Netsuke are small carvings traditionally worn on a man's kimono to help secure items to a sash. This figural netsuke depicts a woman or geisha wearing a kimono and holding a flower. This figure was expertly carved and painted with black, red and green hues.

An artist's signature in Japanese is present at the side of the netsuke. The netsuke is secured to the string at each end through holes where the kimono cord would traditionally pass. Completed with a barrel clasp for secure wear. There is very light wear to the black paint on the netsuke figure, which is not immediately noticeable when worn. The price has been reduced to reflect this. This listing is for the item only. The Art Deco era is famous for being the "Gatsby" or "Roaring Twenties" era. A lot of gorgeous and timeless designs in jewelry came out of this period.

Jewelry from this period was most often crafted between 1920 and 1940. Art Deco jewelry sometimes featured white gold or platinum, geometric designs, European cut diamonds, filigree, and calibre cut stones that are specially cut to fit the design of the piece. During the Art Deco period jewelers often made jewelry upon custom order, this would usually take weeks to months to completely craft by hand. For most of Japan's history, there was minimal contact with the Western world, and therefore, western-style jewelry did not make its appearance in Japan until the mid-1800s. In fact, Western influence didn't hit Japan until the Meiji Restoration of Imperial power in 1868, due to the fact that most Western style jewelry did not align with traditional Japanese clothing, like the kosode and the kimono.

Once Western style clothing gained popularity throughout Japan, it fueled demand for commercial manufacturing, bringing about the rise of timeless Japanese legends like Mikimoto Kokichi and K. In 17th century Japan, a need arose for men who wore garments such as the kimono, which lacked pockets, to carry their belongings. Containers called "sagemono"pouches, woven baskets, or ornately crafted boxes called "inro"were secured to the robes' sashes with cords and fasteners known as netsuke. These ornaments were often made of ivory or coral and were beautifully and elaborately carved, which eventually led to them being recognized a symbol of Japanese style. More recently, netsuke containers have become exceptionally popular with collectors.

Netsuke can depict many different themes and styles, and most are only a few inches in size. Their motifs often centralize around Japanese history and mythology. The most recognized styles of netsuke are kataborinesuke, which is sculptural, and mennetsuke, which depicts masks.

The seller is "abeautifultimeco" and is located in Fort Collins, Colorado. This item can be shipped worldwide.