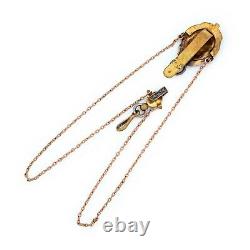 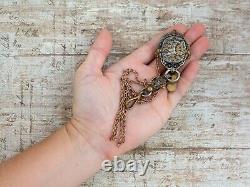 We have similar Fob and Nouveau items, which would pair nicely with this piece, for sale this week. Item Description by: Angela A. Markings: Unidentified maker's mark "MT" and a star mark on the back of the clip, tested, and guaranteed. Gram Weight: 35.7 grams. 925 sterling silver and 14k rose and yellow gold filled over sterling silver accents, 14k rose gold filled over base metal chains, brass accents.

Handmade during the Nouveau era. Composed of sterling silver and 14k rose and yellow gold filled over sterling silver, rose gold filled over base metal chains, and brass fob clip clasp and accents. Features a Shakudo accent; Shakudo is a billion of gold and copper that appears in Japanese jewelry and was first introduced to the west in the mid-19th century. The use of Shakudo dates back to at least the 12th century in Japan and was typically used to accent pieces made of less valuable metals, such as sterling silver.

Features a huge sterling silver belt clip adorned with a Shakudo accent harvest scene that includes a basket of flowers, a hat, and growing vegetables. From the bottom of this belt clip dangles a brass watch fob clip clasp, attached to a base that contains a decorative Shakudo urn motif filled with overflowing flowers and foliate motifs. On each side of the large belt clip, a rose gold filled over base metal chain is attached, draping downwards and connecting to the brass side of the watch fob clip clasp. A pocket watch could be attached to the fob clip clasp. There is some light wear to the gold filled over base metal in some areas, as well as some tarnish to the sterling silver.

The price has been reduced to reflect this. This listing is for the item only. This was very true due to the gorgeous designs that came out of this period.

This era focused on women, and the beauty of nature and the pieces were often large. Enamel was a standard material used in Art Nouveau jewelry as the period was more about the importance of the design over the materials used to create it. The Art Nouveau period happened before the start of the first World War, when mass manufacturing took over the production of many products, including some jewelry. The Meiji era is a period of Japanese history which began in 1868 and lasted until 1912.

During this era, radical changes began to occur throughout Japanese society, which saw a shift away from isolationism and feudalism to a society influenced by European and North American political systems. As well as adopting Western styles of government, Meiji Japan was also influenced by Western culture, including architecture, fashion, and jewelry.

Jewelry from the Meiji era is unique from earlier Japanese pieces, as well as jewelry from the West, representing Japans attempts to redefine itself as a world power while still retaining its traditional culture and practices. Intricate work with bronze and cloisonné enamel was prevalent during this time, as were pieces featuring cultured freshwater pearls, coral, and diamonds. Brooches were especially popular amongst Japanese women during the Meiji era since they did not alter the body, as were traditional nesuke (small carvings worn on the belt of a kimono) and okimono (decorative objects). Just as Western jewelry influenced Japanese jewelers, the pieces produced during the Meiji era became very popular amongst Western jewelers and collectors and, to this day, remain highly sought amongst modern collectors.

The watch fob first became popular in the 1770s with the introduction of waistcoat pockets in mens clothing. Not only did the fob make it easier to remove the pocket watch and make it easier to handle securely, it was considered very fashionable around this time to have a watch fob hanging from each pocket, often seen with small personal seals and other decorative elements.

In the Victorian era, it was wildly popular for women to braid locks of their hair and give them to their husbands as a human hair watch fob. With time jewelers started making chain-style fobs out of gold, silver or even platinum. Gold filled jewelry consists of an outer solid gold layer over a metal base, and 5% of its weight should be derived from gold. This solid layer of gold is laid over a base of sterling silver or some other kind of metal to produce a high-quality gold look. The item "Antique Vintage Art Nouveau Japanese Shakudo Mixed Metals Pocket Watch Fob 35.7g" is in sale since Sunday, September 20, 2020.

This item is in the category "Jewelry & Watches\Watches, Parts & Accessories\Watch Accessories\Chains & Fobs". The seller is "abeautifultimeco" and is located in Fort Collins, Colorado. This item can be shipped worldwide.