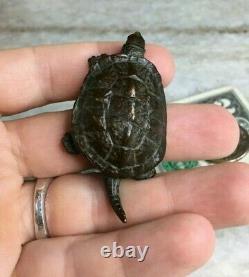 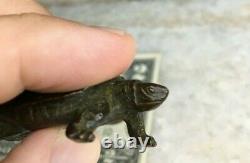 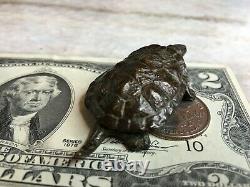 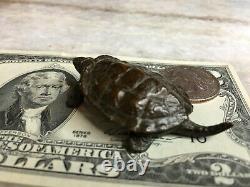 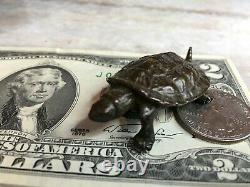 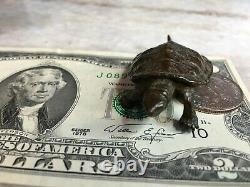 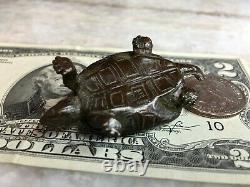 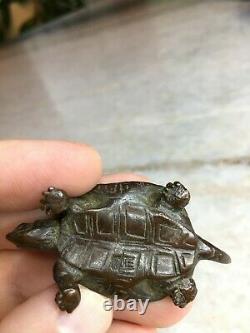 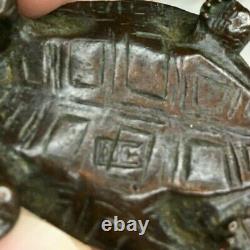 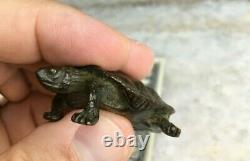 Very realistic in the hand; including the subtleties such as the eyes and mouth details. The Japanese word for turtle is kame, and the Japanese believe that the turtle is a symbol for wisdom, luck, protection, and longevity; longevity due to their long lifespan and slow movements. The turtle is magic and unites heaven and earth, with its shell representing heaven and its square underside representing earth.

In pop culture, a giant turtle with a snake tail called "Genbu" is seen as a powerful symbol, often considered as one of the four animal guardians of Japan. Black Tortoise or Gen-bu, sometimes depicted as a combination of a tortoise and a snake, protects Kyoto from the north; the other beasts and associated directions are the Azure Dragon (Sei-ryu, east), the Vermilion Bird (Su-zaku, south), and the White Tiger (Byak-ko, west).

In Japan, however, the turtle has developed a more independent tradition than the other three prominent beasts of China. The minogame, which is so old it has a train of seaweed growing on its back, is a haven for immortals and the world mountain, and symbolizes longevity, good luck, and support. It is the symbol of.

The god of seafaring people. The tortoise is a favored motif by. Carvers and other artisans, and is featured in traditional Japanese wedding ceremonies. There is also a well-known artistic pattern based on the nearly hexagonal shape of a tortoise's shell. These patterns are usually composed of symmetrical hexagons, sometimes with smaller hexagons within them. Is a large tortoise or turtle combined with a snake. Sometimes he is represented as two creatures-a snake wrapped around a tortoise-and sometimes he is represented as a single creature-a tortoise-snake chimera. His home is in the northern sky. He spans seven of the twenty-eight Chinese constellations, taking up one quarter of the entire sky. The constellation which makes up the snake's neck is located in Sagittarius. The constellations which makes up the tortoise's shell are located in Capricornus, Aquarius, and Pegasus. The constellations which make up the snake's tail are located in Pegasus and Andromeda. Genbu is one of the. Or Four Symbols, which are important mythological figures in Taoism. Is the guardian of the north.

He is associated with the Chinese element of water, the season of winter, the planet Mercury, and the color black. He represents the virtue of knowledge. He is enshrined in the. Shrine, north of Kyoto's Imperial Palace.

Genbu is named differently than the other shijin; rather than directly describing a color and animal, i. Black Tortoise, his name is written as. Meaning dark, occult, or mysterious, and. The word tortoise is not used for his name, because it was also used as a slur in China. So this euphemistic name was used to refer to the Black Tortoise.

His name comes from Chinese mythology, where it is with the Taoist god Xuan Wu (the Chinese pronunciation of Genbu). Xuan Wu was a prince who lived in prehistoric northern China. He lived in the mountains, far from civilization, where he studied Taoism as an ascetic. He learned that to achieve full divinity, he would have to purge both his mind and body of all impurities. While his mind had become enlightened, he still had to eat earthly food, and so sin remained in his stomach and his intestines. So he cut them out and washed them in a river to purify them. When he did this, his stomach turned into a large demon tortoise and his intestines into a demon snake. The demons began to terrorize the countryside. Xuan Wu subdued them, and instead of destroying them he allowed them to atone for their sins by serving him. They became his generals: a snake and a tortoise. It is these two generals which became Xuan Wu's-and Genbu's-symbols. Is associated with yin energy-the forces of darkness and shadow-and in ancient China was worshipped as a god of the moon (another strong yin force) in addition to being the god of the north.

Was also viewed as having soothsaying powers and the ability to travel between the lands of the living and the dead. The tortoise is a symbol of longevity and immortality, while the snake is a symbol of reproduction and multiplication.

It was believed that all tortoises were female and had to mate with a snake to reproduce. The intertwining of the two was a symbol not only of long life and fertility, but also of the balance of yin and yang. In later centuries, as belief in. Waned, the Four Symbols were gradually replaced by the Four Heavenly Kings of Buddhism. And his symbols were largely absorbed and supplanted by the Buddhist king.

Another turtle whose shell is blooming with algae can also be found. Which means a turtle that looks like it's wearing a straw raincoat!

It takes a very long time and requires just the right conditions for algae to bloom on the shell, so this turtle also seems to be a good omen. This item is in the category "Collectibles\Animals\Amphibians & Reptiles\Turtles". The seller is "cosmic_goods" and is located in this country: US. This item can be shipped worldwide.